Why is the Oregon Coast Called ‘The People’s Coast’?

In 1967, the Oregon Beach Bill established public ownership of land along the Oregon Coast from the water up to sixteen vertical feet above the low tide mark. This made all 363 miles of the coastline free and pubic, one of the few coastlines in the United States owned by the people. Check out this video from Travel Oregon to learn more about why and how this bill has kept Oregon’s spectacular coastline wild and free for all to enjoy.

Join us as We Explore the Oregon Coast this September

We’re thrilled to be returning to Oregon this fall for the Oregon Coast Explorer tour where we’ll take full advantage of the beautiful coastline as we explore the shores from Coos Bay to Lincoln City with many diverse stops in between. Here are just a few of the scenic spots we plan to visit: 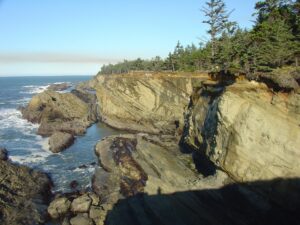 Shore Acres State Park is perched on a bluff overlooking the Pacific and was once the grand estate of lumber baron Louis Simpson. You can stroll through the five-acre garden filled with exotic plants from around the world, including a Japanese-style garden and two rose gardens. Beyond the gardens is a secluded cove at Simpson Beach, or you can walk the cliff’s edge and enjoy the spectacular view of the waves.

Explore the Dunes by Dune Buggy 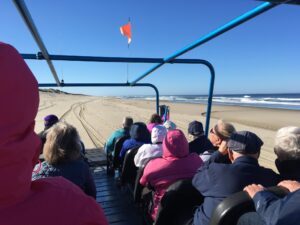 You can’t miss the Giant Dune Buggy Tour at the Oregon Dunes National Recreation Area. This is the largest expanse of coastal sand dunes in North America, stretching 60 km along the coast. This hour-long tour may be some of the most fun you have had on sand! 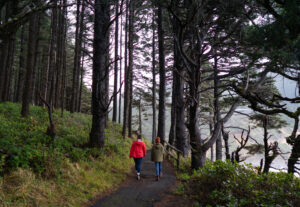 We’ll admire the panoramic vistas at Cape Perpetua and thrill to the crashing surf at Devil’s Churn, a narrow inlet that developed over many thousands of years as wave action carved into the basalt shoreline. As the tide comes in it can throw spray several hundred feet into the air when the waves reach the end of the churn.

If you could use two minutes of relaxation, check out this short video of the Devil’s Churn. 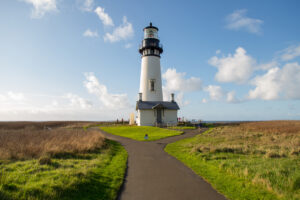 There are many lighthouses along this stretch of coastline, and we visit the museum and grounds of Yaquina Head Lighthouse at Newport. Standing 93 feet tall, the lighthouse has been guiding ships along the west coast since the light was first lit on August 20, 1873. The lighthouse is still active, it has recently undergone restoration to preserve its important history. There is also an interpretive center featuring exhibits on seabirds and marine life as well as the history of the area. 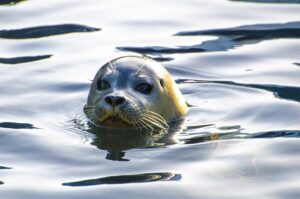 We’ll board the MV Discovery for a two-hour sea-life cruise around Yaquina Bay looking for everything from Gray Whales to tiny plakton. With the help of friendly naturalist guides, hopefully we’ll see some sea lions, seals, marine birds, whales, and maybe a pot full of Dungeness crabs. The 65 foot MV Discovery is the largest cruiser on the Coast and boasts a heated cabin, seating, and complimentary coffee and tea. 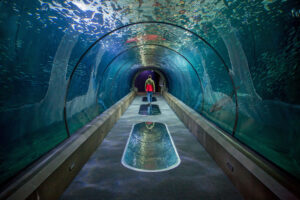 Learn more about the flora and fauna native to the region at the Oregon Coast Aquarium. We’ll experience the ethereal magic of jellyfish and the magnificent colors of the many varieties of fish. Enjoy watching sea otters, harbor seals, and California sea lions or check out the largest outdoor Seabird Aviary in North America. After exploring the exhibits, we have a unique experience planned: a private dinner among the aquarium tanks with a great variety of marine life swimming around us.

In addition to these coastal adventures, we’ll also make use of our route to and from the coast for a few fun stops. Heading south, we cross the border at Osoyoos and drive across the volcanic tablelands of central Washington and the Columbia Basin to Yakima. Next, we drive through the scenic Columbia Gorge with a stop at the Discovery Center in The Dalles. We’ll enjoy views of several waterfalls such as impressive 188-metre high Multnomah Falls. We’ll also spend a night in downtown Portland. On our return trip north, we visit the Evergreen Aviation Museum to see Howard Hughes’ plane, the giant Spruce Goose. We spend one night in Seattle and then make shopping stops at Bellis Fair Mall and the Duty-Free Store, before heading home via the Coquihalla.

Learn More About the Tour

Oregon’s nearly 550 km of pristine, public coastline is made up of diverse terrain that boasts of rugged cliffs, lush evergreen forests, Sahara-like sand dunes, and pristine beaches. Join Wells Gray Tours as we follow the Pacific Coast Scenic Byway between Coos Bay and Lincoln City. Stroll the beaches and look for treasures washed up by the constant waves. Explore a worldclass aquarium, then savour dinner among the sea creatures. Get close to a myriad of marine life during a Yaquina Bay cruise. Yell out loud as you ride the sands in a dune buggy. Tour the fabulous Shore Acres estate and gardens. Shop for crafts made from the rare Oregon myrtlewood. Watch waves crashing into the narrow slot of Devil’s Churn. There are so many awesome sights along Oregon’s splendid coastline.