Wells Gray Tours is pleased to be offering cruises with Norwegian Cruise Lines in 2016. 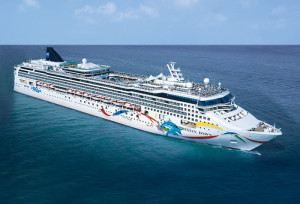 While I have not personally cruised with Norwegian, two of our Wells Gray staff, Fraser Neave, Director of Product Development and Shane Stevens, Operations Assistant have. They sailed on the Norwegian Star on a Baltic cruise in August and returned with very positive reviews.

We are excited to offer Norwegian Cruise Lines as it offers a hybrid of cruising experiences, mixing some of the traditional and familiar amenities with new features. Norwegian calls this of “freestyle cruising”.

What does this mean for you the cruiser?

An additional bonus for Wells Gray customers is that Norwegian offers rooms for singles on some of its ships. This makes cruising much more affordable for individuals travelling on their own as they will no longer pay a singles supplement if they book into a single room.

Norwegian is known for its diverse demographics ranging in age from young families to older folks depending on the time of year and the cruise route. They have excellent programs for kids and teenagers which makes it easy for families to vacation together and yet still have some adult time.

Entertainment was certainly a highlight for Fraser and Shane. Fraser said,” in my opinion it was better than any other cruise line I had experienced. The show on the first night was an introduction to the performances upcoming during the cruise, so we got a bit of a preview for each one. This was a smart move because it would get people excited for certain shows several days in advance; all performances were completely full. The Frankie Valli tribute band was fantastic and perfect for the age range on the ship. They got a standing ovation and did an encore song. The acrobatic dancers were mind-blowing and incredible to watch. Claire Vinkesteijn, a piano player-singer, performed some of her own songs but also included hits ranging from Liberace to Adele and she did so with a full band behind her. “

Our first sailing with Norwegian will be our Catalina Island and Coastal Cruise leaving April 25th, 2016. Whether you have never cruised before or are looking for a new cruise experience we think Norwegian Cruise Lines will offer all our travellers an amazing experience.