In May of this year Wells Gray Tours will take almost 700 guests on our 45th Anniversary Cruise to Alaska.  Little did I know when I first ventured into the travel business that it would grow into a lifelong career. We are excited getting everything ready, so I thought it would be interesting to share with you our past history of anniversary celebrations.

On the occasion of our 10th Anniversary in 1982, I offered a special promotion for Reno which included a party featuring a magician by the name of The Amazing Elliott. The concept of an Anniversary tour resonated well with our clients and the tour was a huge success.

Between 1982 and 1994, our Reno Anniversary Tour had become increasingly popular and we offered it annually in the fall. The banquets with entertainment became more elaborate and expensive, but you, our customers saw value in these anniversary tours. In the early years, we went to Karl’s Silver Club or Boomtown where the buffets were almost free since we brought several hundred people into their casinos.  Later, we got really fancy and booked the National Automobile Museum, eating dinner among the antique cars.

After 1994 as we expanded into other kinds of tours we decided to do something different than Reno and celebrated the anniversary in Spokane, Washington, with a musical at the theatre. In 1995, for the 23rd Anniversary, I hired Hagood Hardy and his band from Toronto, and we nearly filled the Sheraton Hotel due to his renown.

The 25th Anniversary of Wells Gray Tours was approaching and for most of 1995 our staff was considering ideas for the quarter-century celebration. A bold and almost reckless idea came to mind – maybe with the popularity of the Anniversary Tour, we could sell a ship full of people. I approached Holland America Line and negotiated to charter the Rotterdam for a four-day cruise on the BC coast. The terms were downright scary, as we had to pay the deposit 1½ years in advance and an irrevocable letter of credit for the balance. This meant that we could not cancel the charter for any reason, so if the sales bombed, I was on the hook for a lot of money.

We announced the 25th Anniversary on the drive home from Spokane in 1995 and took over 200 bookings that day. To my great relief, we were completely sold out a year in advance with 1,100 passengers on board. On May 20, 1997, 25 coaches took everybody from Kamloops and the Okanagan to Vancouver and the Rotterdam sailed up the Inside Passage. We stopped at Ocean Falls which had been a bustling paper mill town until the plant closed in 1980. When our ship disembarked over 1,000 people, the 50 remaining residents took them on walking tours of the empty streets and abandoned buildings and, for a few hours, Ocean Falls came alive again.

The 25th Anniversary cruise was a momentous achievement, but I have never been brave enough to try a ship charter again. After that, we started celebrating Wells Gray Tours’ Anniversary every fifth year, due to the amount of work needed to organize it. This also meant that the Anniversary Tour became a bit more special since it did not run every year.

The 30th Anniversary had nearly 500 bookings and travelled on the Rocky Mountaineer train with a stay at the Banff Springs Hotel. For the 35th Anniversary, we filled half of Holland America’s Oosterdam for a four-day cruise with stops in Victoria, Astoria, and Seattle. The 40th Anniversary was a seven-day Alaska cruise on the Zuiderdam which attracted about 600 customers.

Preparations have been underway for the past year for our 45th Anniversary, a nine-day cruise on the Norwegian Jewel to Alaska. Since the itinerary was similar to the 40th Anniversary, I decided to change cruise lines and booked Norwegian because of their major presence at our annual tour operators’ convention. Another factor was trying to attract customers who had taken previous anniversary tours and might want a different ship, cruise line and experience. 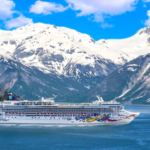