Relaxing with new friends on the deck of my little cabin, overlooking Nimpo lake I marvelled at my good fortune. This was my first experience of travelling as a single with Wells Gray Tours and when offered the opportunity I had several misgivings— fortunately all proven wrong. I was having a wonderful time.
We were picked up in Sidney, joined the majority of our group from the mainland in Nanaimo, and set off next morning for Port Hardy, in a comfortable roomy coach. The original plan was to board the Northern Sea Wolf for a ten-hour trip sea voyage to Bella Coola, but plans had changed. An early rising brought us sleepy eyed to the airport, only to be told the flight was delayed due to an overcast sky and fog. This provided an excellent opportunity to become acquainted with our Tour Director, Aina Juzups and my fellow passengers.
Finally, we were off! Due to poor visibility we flew low — gliding over a rugged landscape with intimidating mountains rising on either side. Below we could see deep valleys, wandering streams and light vegetation. The Tour Guide pointed out The Hill that our bus must climb over when we left Bella Coola for Tweedsmuir Park.
This rather infamous road was completed in 1953 by local volunteers working from either end with bull dozers. The actual hill drops 4,020 feet in 19.4 km, on grades of up to 15%. There are some short one-lane sections, and there are many pull-offs. There are some huge unprotected drop off s– no guardrails. It is part of the major route to Williams Lake. Believe me — even as a passenger it is a challenging experience. However on our trip, the bus was handled expertly by our driver and I had few qualms even when our local guide pointed out some particularly scary spots.
Bella Coola refers to the land along the Bella Coola River. The declining population lives in the valley near the river– 2,010 along the road, with 148 in the town area. Approximately 41% are First Nation people. Awesome mountains rise on every side. The town has a frontier feeling, while the small farms are a picture of permanence. —some painted in gay colours with flourishing gardens, perhaps reminiscent of the first Norwegian settlers We visited several of the historical churches, many still active today.
Now from my deck I could see the small float plane which was to provide the highlight of our trip—a one-hour flight over the wilderness of Tweedsmuir Park. This included the popular Lonesome Lake and Hunlen Falls—Canada’s highest waterfall, 400 metres, measured as a continuous drop. Later we saw tumbling glaciers and a huge shield volcano and lava flow with brilliant colours—Rainbow Ridge.
At the end of this exciting day we enjoyed another delicious meal at Stewart Lodge and socialized with our new friends, feeling a little sad that our trip would soon be only a happy memory and a collection of photos!

We started our trip, a group of strangers who soon bonded through shared sights and experiences. Steeples in the skies marking the worshiping places of the faithful, riding the crested waves viewing the land from a reverse vantage point while lighthouses guide the boats and ships into safe harbours.  From little fishing villages to big cities the people show pride in their homes, no matter how grand or how small, they are well kept.  Yards are mowed and the dwellings are painted in rainbows of colour – purple, green, yellow, red and blue in a variety of vivid hues.

The history is cemented deep into the stones, bricks and mortar piled high into the sky to form shapes of long lasting buildings standing tall.  Stories were told of past lives and the harsh conditions of which only the strongest survived.  Hard work often broke their backs but never their determination to succeed.  Pains have been taken to treasure the history while moving through time into an unfathomable future their descendants are now living.

We pass briefly, stopping here and there, sight seeing, finding lodging in modern hotels, historic grand buildings, motels and cabins.  We’ve shared in the hearty fare of local foods while possibly tipping a beer or two and tunes that take control of our hands and feet.  A short visit with an Islander speaking unfamiliar verse with an accent brought from far away lands. They are a sea faring lot, farmers, stewards of the rich red soil, coal miners and men of the woods all caught in difficult changing times.

Today becomes tomorrow’s memories shared with nearly 50 souls.  Some we know and some we may never know again but always returning, mingled in our thoughts of Nova Scotia, Prince Edward Island, Cape Breton, and our final days in Newfoundland.

Hale to Canada’s Eastern Providences and many thanks to Neal and Aina for safely guiding us on this incredible journey!

As a lover of Jazz, Soul, Country and Blues Music it was most memorable to hear some authentic playing of each genre by southern local artists. And to visit the museums, music venues and Grand Ole Opry. To say nothing of listening in the pubs from the sidewalks. Such treats. We all make mistakes. For the inmates at the Louisiana maximum-security Angola Penitentiary their mistakes mean they will never leave. They will die and be buried inside. We travel there by motor coach from the luxury of the American Queen on our Mississippi River Cruise. One talks and interacts for some minutes with a few select prisoners. Shake hands in sincerity for their in prison accomplishments. Travelling back to the boat, a sudden reflective moment. Even murderers look much like other people. One could pass them on any street and not look or think twice about them. It would be difficult to have been so pampered on the American Queen and not have the fondest memories.

On my trip to Haida Gwaii some years ago I walked into the little Pizza Parlor next door to the restaurant of the Sea Raven Motel. It smelled so nice I ordered a pizza for supper. I sat up on a stool to wait. Next to me also on a stool was a little local lass, aged ten she told me. Not shy at all. In the space of twenty minutes as I waited, I learned everything one could possibly ever wish to learn about absolutely every person in Queen Charlotte City. And I do mean all 852 of them! The looks and smile of the couple working testified to the fact I wasn’t the only person she had treated in her time to her exhaustive knowledge of her home. I have endless fond memories of my Wells Gray Tours trip to Haidi Gwaii, but when I reminisce or extol it’s delight to others, it is that smiling delightful little native lass that always brings a smile to my face as well. Great pizza too! 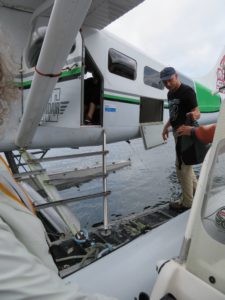 Experience the world they say! As we approached Rose Harbour after an amazing visit to Sgang Gwaay, I wondered just how we would manage the changeover from Zodiac to Seaplane in the middle of the bay. Remarkably smoothly but not without its challenges! First we had to struggle out of giant, rather damp safety suits while bobbing around on the boat.  As the seaplane joined us and Patrick and Peter secured plane and zodiac , the five of us squashed into the bow and inched our way into the right seating order while they aided the second group safely down the ladder and into the stern. For us, it was the last stage of a new experience of the world as we climbed aboard the seaplane for an amazing return ride over Haida Gwaii.

Hi, Wells Gray Tours, I had to send in my most memorable moment travelling with you on Cowboy Trail and Waterton Lakes tour, September, 26th 2019. It turned out to be Christmas in September!!! We did a boat cruise on Waterton Lake in a white out snow storm, with commentary! We were the only bus tour company to show up, kudos to WGT! Only in Canada eh! Thanks for the awesome memories.

One of my most memorable moments took place in June, 2013 on our Ireland trip.  It was one of our rare, very rainy days when we would have appreciated staying on the bus!  But after a fortifying Irish coffee at The Red Fox Inn, we were entertained with a sheep dog demonstration.  Each dog was trained with a different whistle and we also learned about the various breeds of sheep.  We stayed dry in an open front shed while our guide called the rain “pennies from heaven”.  Growing up on a farm, I can really relate to this awesome experience.  Ireland is so much more than green fields, castles and kissing the Blarney Stone!

My unforgettable experience happened on our trip to Cuba in February, 2009.  We were privileged to visit and meet the owners of a small subsistence farm.  We were welcomed with freshly ground coffee and everyone in our entire group each sampled a few ounces in a variety of tin and glass “cups” cut from bottles.  Their only water source was a barrel cut in half and dragged up a steep hill by horse. We learned about their sheep, an invasive species called Marabou and the 2008 hurricane which was one of the worst storms in 50 years.  Would have loved to be able to talk the same language without having our guide to interpret.  It was a very emotional experience for me and I did not want to leave! 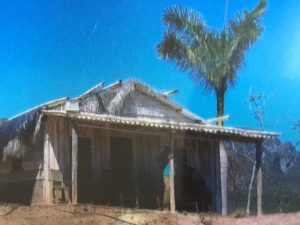