In the spring of 2014, the 5th edition of my book, Exploring Wells Gray Park, had only
two cartons left unsold and I knew I had to make a decision soon about whether to produce a 6th
edition. Previous editions had taken about nine months to research, correct, hike the trails again,
check the accuracy of a myriad of facts, proof and proof again. Each time it was a huge task and I
vowed at the end of the process that this edition would be the last.

The 1st edition was published in 1974 while I was still a student at Simon Fraser
University. I had written several essays about the geology of the Clearwater Valley, so I took out
the scholarly footnotes, added some hikes and history, borrowed $1,000 from my parents to print
it, and lo and behold I was a published author. Other editions followed, each expanded and
improved. The 5th edition in 2004 reached 350 pages and even included eight pages of colour
photos which was quite extravagant at the time. By 2014, Exploring Wells Gray Park had sold
21,000 copies, qualifying as a Canadian best-seller, and perhaps helped to increase tourism in

Wells Gray Park as visitors stayed longer to experience more sights.
By May 2014, I had convinced myself that a 6th edition was a good idea. My wife told me
I was crazy; nine months later I was inclined to agree. The biggest part of this project is hiking
the trails. So much can change in eight to ten years between editions that I couldn’t assume that
trail conditions, bridges, signs and views were still correct. Just to be sure that distances and
heights were measured accurately, I bought a new GPS and made careful notes about every trail,
discovering numerous changes. From late May to Thanksgiving, I was in the Park nearly every
weekend and completed about 40 trails. It was very good for the waistline!

Early in the project, I decided that the 6th edition would be all colour, despite the cost. I
found that only two companies in western Canada could print a colour book with 5,000 copies,
and I selected Friesens in Manitoba. In the fall, I began gathering all the colour photos I could
find from my collection, as well as from hiking friends and other contributors. Steve at
Terragraphic Design Studio began putting it all together, a two-month task. My self-imposed
deadline was February 26 and Steve transmitted the whole package to Friesens right on time.
Although I had proofed Steve’s work twice, Friesens sent another set of proofs in full
colour and that’s when I realized that the book was going to be stunning and well worth all this
effort. As I write this, 220 cartons weighing 4½ tons are in a truck somewhere between Manitoba
and Kamloops, and scheduled to be dropped in Wells Gray Tours’ parking lot on April 1st. I trust
it will not be a joke!

Within a week, you can buy a copy at many bookstores and Wells Gray Tours offices.
The price is $24.95 which is a bargain for 400 pages, 250 colour photos, and a dozen topographic
maps. If you see me around, I will be delighted to do an autograph. Or consider taking the Wells
Gray Park tour on May 23 where you will get a complimentary copy.
Happy exploring in Wells Gray Park! 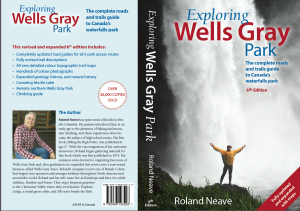 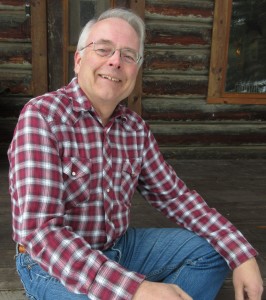