Did you know that Costa Rica has the highest density of biodiversity of any country in the world? While the relatively small country covers just 1/3 of 1% of the earth’s landmass, it contains a whopping 4% the of species estimated to exist on the planet. To give that figure some scale, Costa Rica is about the same size as Nova Scotia, Canada’s second-smallest province. And just to make it even more impressive, many of these species are endemic to Costa Rica, meaning they exist nowhere else on earth!

When I visited Costa Rica a few years ago, I was blown away by the flora and fauna at every turn. I lost count of how many plants and animals I saw after day one. Here are some of my favourite amazing and unusual creatures who call Costa Rica home:

Sloths – The Celebrities of Costa Rica

The sloth is the star animal attraction of Costa Rica. I don’t know if it’s their adorable faces or their laissez-faire attitudes, but everyone loves sloths. Two of the world’s six species of sloth live in Costa Rica: the Hoffman’s two-toed sloth (Choloepus hoffmanni), and the brown-throated sloth (Bradypus variegatus). You’re much more likely to see the slightly smaller, more active brown-throated sloth (shown above) on a visit to Costa Rica as it is active during the day while the Hoffman’s two-toed sloth is nocturnal. If you’ve ever wondered why sloths are so slow, it’s partly because they’re almost blind and partly because they have the slowest digestion system of any mammal (it can take up to 30 days for them to digest a single leaf). In order to conserve energy and stay safe climbing in the trees, sloths have evolved to take it reeeeaaaaallly slow.

Calling all bird nerds! Costa Rica is a birdwatcher’s paradise. The country boasts over 850 bird species – more than all the species in Canada and the United States combined! Some birds to keep a look out for include toucans, scarlet macaws, motmots, and the stunning multi-coloured resplendent quetzal (Pharomachrus mocinno). Ancient cultures believed the quetzal had a connection to the divine and used their beautiful iridescent green tail feathers in ceremonial decorations.

So Many Cool Bats!

I might be alone on this one, but I LOVE bats. They have a bad reputation (that whole rabies thing really isn’t helping their case) but after living and travelling in Asia for a few years and seeing some of the largest species of bats up close, I’m kind of obsessed with them. Approximately 110 species of bats can be found in Costa Rica and they have an important role to play as many native plants depend completely on bats as their only pollinators. Keep your eyes peeled for all three species of vampire bats, including the huge spectral bat (Vampyrum spectrum). With a wingspan of up to a metre it’s the largest predatory bat in the world. If you’re lucky you might also see the beautiful all-white ghost bat (Macroderma gigas).

If you spot an animal knocking over garbage cans hunting for snacks, it’s probably a white-nosed coati (Nasua narica), locally called a ‘pizote’. This cheeky relative of the raccoon has adapted to human inhabitation and can be quite bold in its advances for food, but make sure you don’t feed them as it’s illegal to feed any wildlife in Costa Rica.

Cats of All Sizes

Costa Rica is home to six different species of wild cats including the ocelot, margay, jaguar, puma, jaguarundi, and oncilla. These animals are very difficult to spot as they are all shy, endangered, nocturnal, or live high in the trees. You’re most likely to spot the jaguarundi (Herpailurus yagouaroundi) as it hunts during the day and sometimes hangs around urban areas. About the same size as a large housecat, it has short legs, an elongated body, and a long tail.

The abundance of wildlife isn’t limited to land as the seas in Costa Rica are home to a wide variety of ocean-life including humpback whales, killer whales, sharks, manta rays, sea turtles, and many unusual fish. The Pacific and Caribbean coasts are home to dozens of important nesting beaches for four sea turtle species—leatherback, green, hawksbill, and olive ridley. People travel from all around the world to get up close to these beautiful animals at one of Costa Rica’s turtle conservation projects. The leatherback sea turtle (Dermochelys coriacea) is the largest living sea turtle reaching up to 8 feet long and weighing upwards of 800 pounds!

If you visit Costa Rica, you won’t be able to miss the abundance of beautiful plants and flowers. I can’t even begin to scratch the surface of all the amazing jungle plants the country has to offer. Costa Ricans love flowers, so you’ll see exquisite floral displays in hotels and find stunning gardens growing in the most unexpected places. One of the country’s most famous flowers is the national flower, the guaria morada (Cattleya skinneri). This purple stunner is one of over 1,300 species of orchids that are native to Costa Rica.

Join Us in Costa Rica in January!

If you want to experience the flora and fauna of Costa Rica for yourself, we have a few seats left on our Costa Rica tour this January. They’re going fast, so book soon! 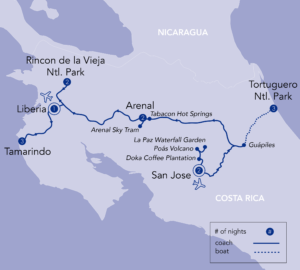 Active volcanoes, lush cloud forests, lowland jungles, rolling savannas, and coral beaches create a spectacular setting to experience the country’s natural beauty and exotic flora and fauna. Much of this area is preserved by one of the most remarkable park systems in the world, making Costa Rica a model for conservation in harmony with community development and economic growth. During this unique tour, we travel through some of the richest habitats of Costa Rica, from Caribbean lowland rain forests to central volcanic highlands, from a cloud forest interior to coastal resorts. One highlight of the tour is our three-night stay at the Diria Hotel at beautiful Tamarindo Beach on the Pacific Ocean.