Have you heard about Little Canada, one of the newest attractions in Toronto? You might have seen it on the itinerary for our recent Ontario Theatre tour and wondered what it was all about. I’m excited to tell you all about it after a recent visit.

I was eager to visit Little Canada when it opened this summer. It received  good reviews from the local press in Toronto and everyone who visited raved about it. Luckily, I’m just a subway ride away and didn’t have to travel too far to check it out. I took my eight-year-old daughter along because she loves tiny things as much as I do!

What is Little Canada?

This unique attraction, located in the heart of downtown Toronto near Yonge & Dundas Square, features miniature replicas of natural and man-made structures located throughout Canada. So far, the destinations include Little Toronto, Little Golden Horseshoe, Little Ottawa, and Petit Québec. The Little Canada team is hard at work on several future destinations including Little North, Little East Coast, Little Prairies, Little Rockies, Little West Coast, and Petit Montreal. They are planning to open one new destination each year, so eventually you’ll be able to explore the entire country! 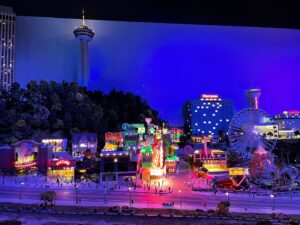 From large landmarks like the CN Tower to tiny details like chickens that actually move, every detail has been carefully considered and accurately rendered. So far, over 200,000 hours of work has been put into building Little Canada and it shows!

The destinations complete a 24-hour cycle in 15 minutes so you can take in different features depending on the time of day. From beautiful hot air balloons rising into the sunrise above Gatineau to the neon signs of Niagara Falls at night, there are lots of interesting things happening all the time. The Canada Day Fireworks over Parliament in Ottawa were just one of the fun surprises! Trains, planes, automobiles, boats…Little Canada has them all! 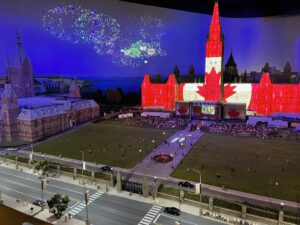 There are several miniature railroads and over 300 autonomous cars zipping around the tiny streets. You can learn more at the Tiny Mission Control where you can see the video monitors and control systems that allow them to monitor whats happening in each area in real time.

You might wonder how this tiny wonderland was created, and you can watch the Little Canada team in action at the Miniature Maker Studio. Every staff member we encountered during our visit was so friendly and eager to chat with us about what they were doing.

Kids (and adults) who want more of a challenge will love using the clues to find Maurice the Moose who is hiding in each scene. 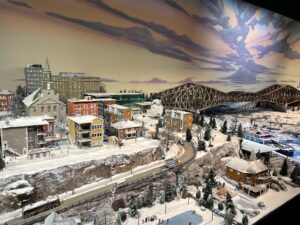 Who will enjoy Little Canada?

I think most people, regardless of age, will enjoy the magical world of Little Canada. There is so much to see that you could spend hours there and still not take in all the small details. My eight-year-old LOVED it and is still talking about it weeks later. She especially liked the autonomous vehicles. The friendly staff at the Miniature Mission Control were excited to show her how all the vehicles move and how everything is monitored. Adults will love the accurate details of each destination and all the humorous touches and nods to Canadian culture and TV shows. 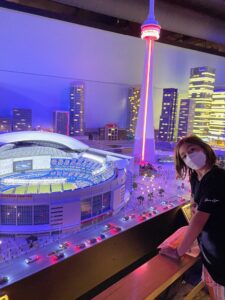 If you’re inspired by all the tiny people, places, and things you see during your visit, you can create your own Little Me. Step inside the Littlization Station where you’ll be scanned and 3D printed in miniature. You can choose to have your Little Me sent home to you by mail or you can become an official Little Canadian and they will place you somewhere in Little Canada.

Learn More About the Story of Little Canada

One of the things that piqued my interest in Little Canada was this article in Toronto Life Magazine about Jean-Louis Brenninkmeijer, the visionary behind the attraction, and the story of how he made his dream a reality. It’s a great read!

We think Little Canada is worth a visit the next time you’re in Toronto and we’ve included it on several upcoming tours for 2023. These tours are still in the planning stages, so stay tuned for more info!