We are commemorating this special occasion with an Anniversary cruise in May to Alaska on the Norwegian Jewel. With over 650 Wells Gray Tours guests already booked we know this is going to be a memorable cruise.

With 45 years in business, I thought it would be interesting to share with all of you some company history as seen through the eye of our long term staff members.

My first interview was with Aina Juzups from our Penticton office who has been working with Wells Gray Tours for over 39 years and currently holds the position of Penticton Office Manager and is also one of our Tour Directors. Aina enjoys working in the office helping our customers book their next exciting travel adventure, but it is being on the road as a Tour Director where the most unforgettable experiences take place. As our Anniversary cruise is travelling to Alaska, I thought this great story would be of special interest to all of you.

“There have been many interesting stories of my time on the road”, says Aina, “but one of the most interesting was a 22 day Alaska tour culminating with a three-day trip on Alaska State Ferries (this was before we started using cruise ships) to Seattle. My coach driver, met a girl on the tent deck and while enjoying her company, he became inebriated. He passed out at the bottom of the staircase, where ferry staff, thinking he was getting off in Ketchikan as that is what he kept saying and the young lady was disembarking there, threw him off the ship in port. Once he realized the ship was leaving, he made such a ruckus that he was put in a straitjacket and thrown in jail! Meanwhile on the ship, I was informed of what had happened. Our coach was parked in such a position on the ferry so that when we docked, if it did not move, nothing moved. I had met another coach driver on the ship named Hercules, who was willing to drive the coach off the ship in Seattle. After numerous ship to shore calls, we docked a few days later in Seattle. Everyone boarded the coach, the ships’ doors opened and there was our original driver standing on the dock along with a replacement driver who had been sent down with a spare set of keys to drive the coach off the ferry and take us home. Our original driver, once he was let out of jail in Ketchikan, chartered a plane and flew to Seattle, to meet us on the dock.”

“I have had the privilege to witness and be a part of Wells Gray Tours as it grew from a very small office on Lansdowne St. in Kamloops offering a few tours such as Wells Gray Park, Barkerville and California with Disneyland, to the world-wide tour company it is today. It has been a very rewarding career that has introduced me to wonderful clients resulting in many new friends and amazing destinations around the world. The journey is not over yet and I look forward to many more adventures with Wells Gray Tours.”

Thank you Aina for sharing this interesting story. It makes very clear as to why we always have a Tour Director on our tours! I know the entire staff and all our customers join me in wishing you many more years with Wells Gray Tours. 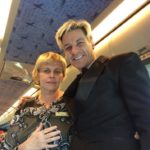 Aina, on tour meeting Jay McNamara, one of the Irish Tenors.